Claire O’Hara Checking in from The Payette River Games 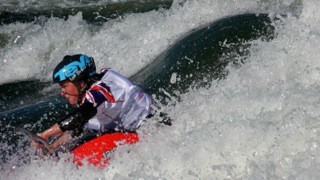 Last year I saw this photo of Stephen Wright and knew that this was a feature I would really like to visit. Then in September at the World Cups I was told about the 2013 Kelly’s white water park event, a big white water festival that would be hosted at the end of the US freestyle tour. 1 year on and I am out here in Idaho having just competed in the first annual Payette River Games event.

The Payette River Games is the brain child of Mark and Kristina Pickard. Mark and Kristina funded and built the Kelly’s Whitewater Park to celebrate the life of their daughter who was tragically killed in a car crash in 1997. The park which was built to celebrate her spirit and love of the river and the great outdoors has revolutionised the small idaho town of cascade and now draws hundreds of paddlers each year.

Hosts of the US Freestyle Kayak Nationals in 2012 they decided to increase the event size this year and make it a multi sport event. So this weekend saw hundreds of athletes, from golfers to volleyballers, kayakers to stand up paddlers, climbers to lumber jacks and fitness fanatics, travel to Idaho to compete in a whole array of events.

Over the course of the weekend I competed in 3 events (freestyle, sprint and boater cross) completing my own boating triathlon. The sprint and boater cross was quite a shock to the system as training for freestyle I rarely paddle forward anymore. So the 1.5 mile flat water sprint really tested me physically and mentally as I raced against some very experienced sprint competitors. In the boater cross I had great fun battling competitors young and old to try and be the first across the finish line and progress through each round.

And the freestyle well, Kellys Top hole is amazing. A tough yet awesome river wide hole with the perfect wave shoulder capable of allowing athletes to throw every possible wave and hole move. It was great to be out here in America competing against all my US tour friends again especially to see how much they had come on since last year.

competitors prepare for the downriver sprint (photo by Phillip Robert)

In the freestyle competition despite leading all the prelim rounds I couldn’t bring it together to match Emily Jackson’s first ride in the finals. She threw an awesome wave routine and at 8 months pregnant took the win. However I was very happy with 2nd place and my rides especially after having had only a few days practise here at Kelly’s before the event.

In the end the Sprint and Boater cross results were combined and US downriver champion Adrivene Levknecht took the win with a clear lead and, in a big boat for the first time in almost a year, I was again very happy to take another 2nd place finish. Especially after a super fun and well fought boater cross final battle with young US paddling super star 12 year old Sage Donnelly.

All in all it was an amazing event at an awesome whitewater park on a beautiful sunny weekend. Thousands of people came out to celebrate and watch all the athletes compete for the massive prize purse (the biggest kayaking purse in the world) put forward personally by the Pickards.

And the original inspiration for me coming to the event, Stephen Wrights huge loop. Well this weekend at the first annual Payette River Games Stephen Wright set a new World record for the highest score in a 1 minute ride using the US scoring system with a huge 2160 points! What an event!

I have to say a massive thank you to a number of companies and individuals who have played a huge part in helping me be able to attend this event. Special thanks to Sweetwater Coaching, Peak UK, Jackson Kayak, Teva, Alpenglow Mountain Sport store, Phillip Robert, the Donnelly family and of course Mark and Kristina Pickard and the team at Kelly’s for creating such an awesome white water park and putting on such a massive fun event.